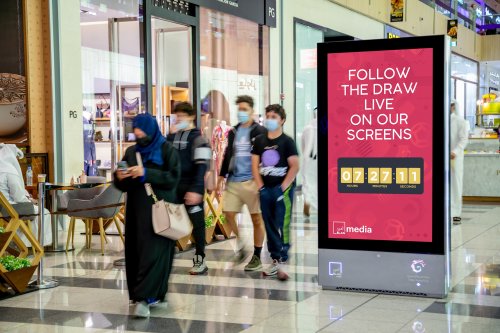 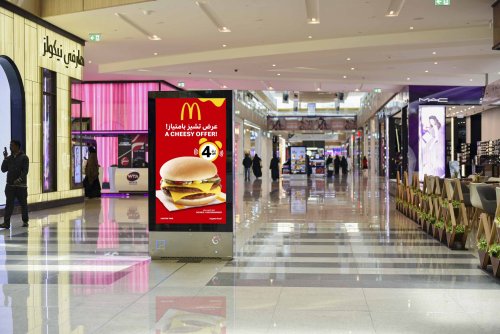 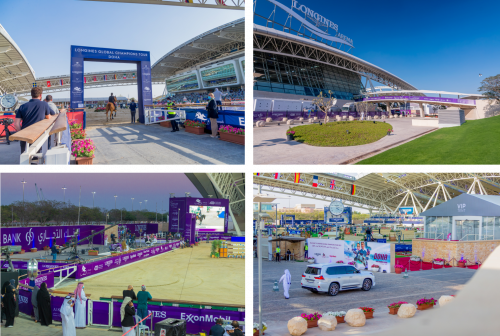 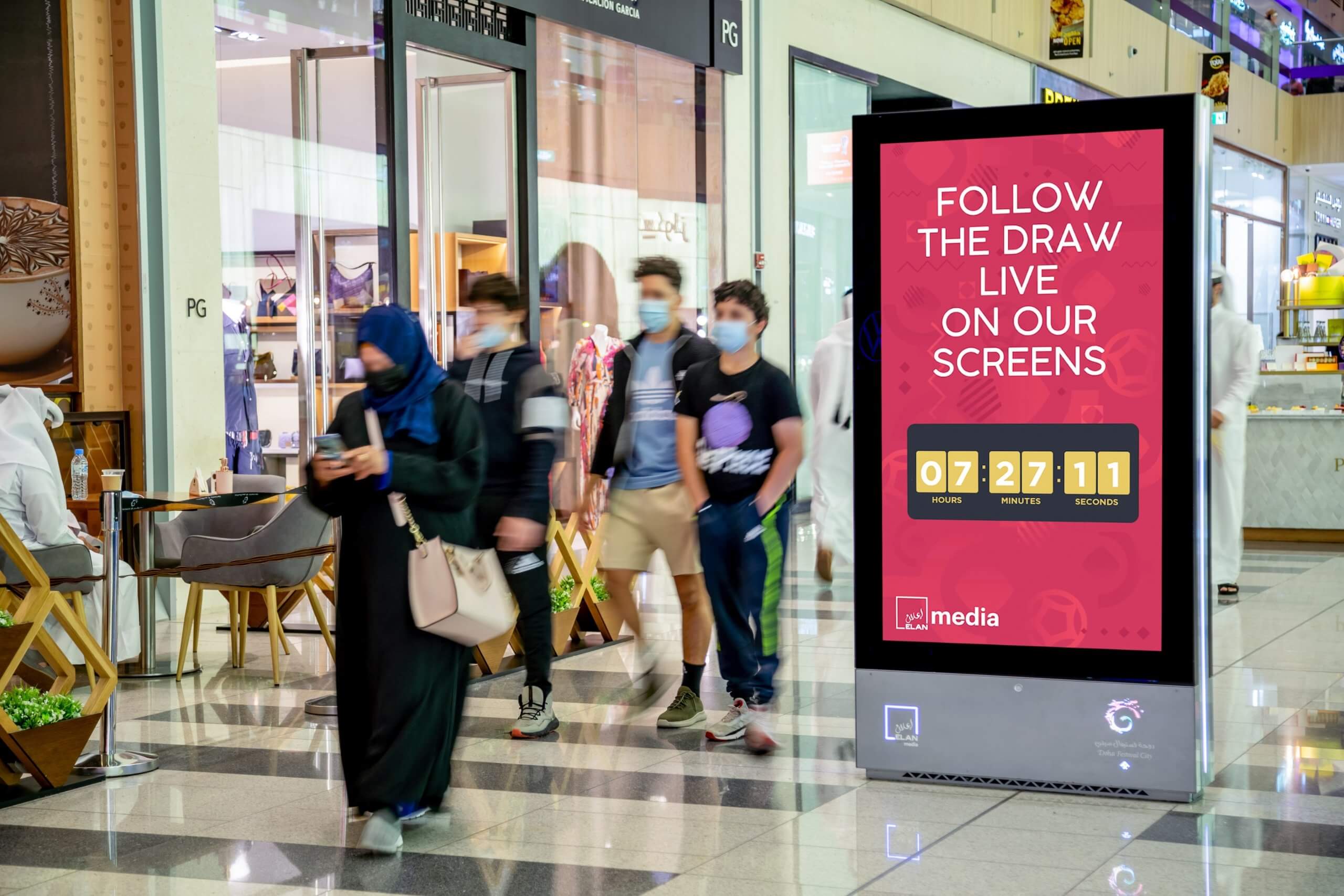 Qatar, which has ambitions to be recognized as a prominent host of major world events, including global sporting tournaments, is in the midst of the countdown to the FIFA World Cup 2022 – the first time the world’s biggest sporting event has been staged in the Middle East. This is a watershed in Qatar’s major events strategy and will focus the eyes of the sporting and travel industries on the state while offering a host of unprecedented opportunities for brands and the destination to expose their offerings to a massive global, regional, and local audience base.

Football fans in Qatar had the chance to experience the thrill of the build-up to the tournament when the final draw for the FIFA World Cup Qatar 2022™ was held in the capital Doha. It was also an opportunity for ELAN Media to demonstrate the power and reach of DOOH advertising.

We wanted to build awareness of the Advanced Dynamic Content Capabilities of our DOOH network and showcase its unrivalled impact to the market. We equally sought to solidify our position as a DOOH leader, a preferred partner of international advertisers, and to emphasize the medium’s advantages of being extremely engaging, creative, and interactive. 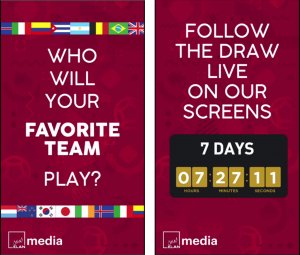 In a first phase, which started on March 25, we seized on the final draw for the FIFA World  Cup Qatar 2022™ as an opportunity to provide a seven-day countdown to this keenly anticipated event, which was being followed by millions, if not billions, around the world but had resonated greatly within Qatar among football fans and those who are simply caught up in the excitement. This would be the first time in the region that DOOH had leveraged a mega event to engage audiences with highly relevant real-time dynamic content. 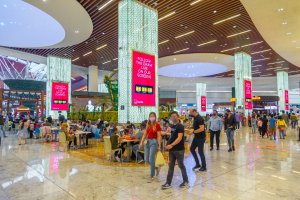 The countdown was followed by a second phase with real-time delivery of the draw results on our network of DOOH screens on April 1st, bringing the excitement to shoppers and diners at Doha Festival City, Mall of Qatar, and Msheirib Downtown. In total, the campaign showed on 162 screens including digital MUPIs across the malls, the food court digital Pillars at Mall of Qatar, The Axis at Doha Festival City (the largest rotating screen in the Middle East) and The Halo at Msheirib Downtown (giant 120sqm digital screen overseeing the busy Barahat Msheirib).

During this second phase, we ran two different copies:

For the countdown phase, a 15-second copy was inserted into the standard advertising loop across all screens. The copy consisted of 2 HTML layers: a static video layer for the animated background, and a dynamic layer with the actual countdown being driven by a pre-set timer displaying the time remaining before the draw.

The reveal phase copy was 60 seconds long and had three key elements: a background video with a jar animation showing balls shuffling, a country reveal animation, the shaping of group tables. This had required intensive pre-launch work in the creation of a comprehensive content library with the flags, names and reveal animations of all 32 countries taking part in the tournament and to be used in eight group tables. In total, the content library stored 100+ copy elements. These copy elements were combined using an HTML file with three layers: the background animation, the half screen country reveal animation and the group table.

The main technical challenge was to build a reliable data feed with the real-time draw information. Since we did not have access to any official data feed for the live event, we had to build our own.

This custom data feed was aggregated from three sources to ensure accuracy and avoid time lags: a video feed from the live event, a feed from media commentary of the event, and a social media feed all of which were monitored by a dedicated team with data loaded into a local database which captured for each country its assigned group and position within it.

An Application Programming Interface (API) was built to feed data from the local database into a real-time database on a cloud platform, and an HTML 5 content package was developed to check the real time database for updates. Once an update was available, all the relevant data was accessed from the database and content from the pre-built library was onboarded to a template to be reflected on screens. The relevant country reveal animation would then play on screens, then the most up to date group table was displayed and the revealed team flag and name were be added to the table at the correct position.

The campaign delivered outstanding reach and engagement, achieving close to a million (920,826) impressions and an average audience attention time 57% above ELAN Media’s network baseline. The final table attained an average attention time of up to 3.18 seconds according to Quividi’s audience and & content intelligence platform.

Besides the increased attention time, audience sentiment was also significantly more positive, with up to 2.9 times more people feeling happy when exposed to the campaign vs the network’s average.

The campaign proved the impact of DOOH in engaging audiences and demonstrated the medium’s outstanding capabilities in delivering relevant, easy-to-update content in an eco-friendly fashion. It also demonstrated how digital advertising is now central to Qatar’s consumer lifestyles as it reaches virtually everyone in the country wherever they are. It’s now as much a part of Qatar life as football is, and we look forward to utilizing our assets further to enhance excitement around the nation’s hosting of the World Cup and celebrate its achievement in becoming the first Middle East country to host the globe’s biggest sporting event.